“John B. Stetson was known as a progressive employer who paid decent wages and hosted a liberal indentured apprenticeship system that reliable led to full-time employment in the Stetson factory” (Ryan 2016). From annual bonuses to Sunday School, industrial paternalism proved to be Stetson’s way of maximizing the output of his employees.

“He didn’t even let the people get away from him after Friday. The employees came here on Saturday and Sunday; and on Sunday they had Sunday School for the children. They had it all.” – Bill Johnson, 1980
The company paper listed the 1920 Christmas gifts with a total value of more than a half a million dollars: 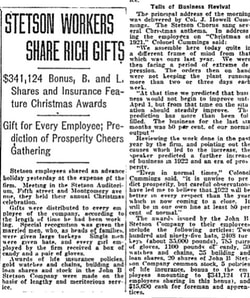 “There were so many people, they all wanted to get into Stetsons… Because of their good reputation for treating the employees. The bonus, the Christmas turkeys, candy, gloves and hats they gave out at Christmas time; that was a big incentive.” – John H. Rudolph, 1982
“My daddy, when he came from Europe, they had a school; and my daddy learned how to get his citizen paper from John B. Stetson.” – Antony Catalano, 1982
"If anybody got sick, they just went upstairs to the infirmary, and they took care of you… they’d medicate you and lay you down… It was a pleasure to work there…" - Catherine Ehrmann, 1982
During the early 20th century, minorities often found difficulty in purchasing homes. Stetson, knowing that his employees, mostly minorities, founded the Building and Loan Association in 1880. By 1925, it had helped more than 1,200 employees buy homes. Although helpful in many ways, some people wonder if there were ulterior motives behind Stetson’s generosity.
“In Stetson, you were stuck in the hat business…during the dull person, you accumulated a lot of debts…so you start working, you can pay it back…next week another payment…you never got ahead.” - John H. Rudolph, 1982
Powered by